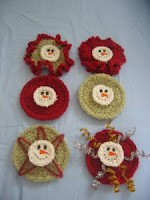 Snowman Faces Ornaments Free Crochet Pattern
This a super easy to make pattern. It is so versatile that I even made a gift bag with them.
There are so many possibilities. I'd love to hear from anyone that comes up with something different! 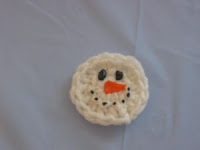 Rep rnd 1-3 of flat round backing. 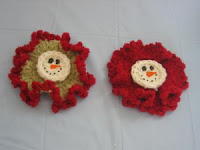 Round backed: Glue one made snowman face in the center of the flat round backing and the ruffled round backing. Add a loop for hanging. 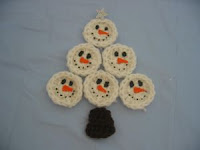 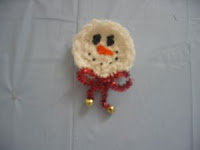 Bow Tie: Cut one chenille stem in half. Twist into a bow. Add small bells to ea end and glue to front of snowman face. Add a loop for hanging.


Squiggle Star: Cut 3 chenille stems in half. Fan fold leaving a straight tail at the top and bottom. Make five of these. Glue to the back of snowman face. Glue white pom-poms to ea end. Add a loop for hanging. 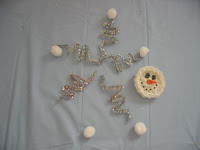 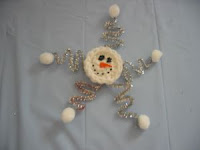 Star: Cut chenille stems into five 5” pieces. Fold the cut pieces in half. Arrange into a star and glue snowman face to front. Add a loop for hanging. You can also layer the finished star onto a plain crochet round for yet another 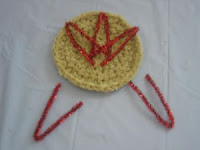 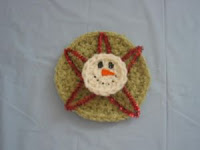 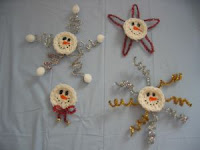 Curly-Q: Fold two of 2 different colored stems in half. Wrap around a pencil to coil. Arrange on a flat surface and glue snowman face to center. Add a loop for hanging. You can also layer the finished ornament onto a plain crochet round for yet another look. 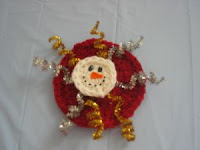 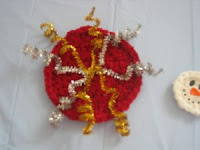 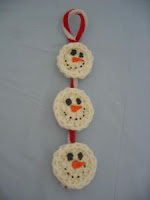 Three in a Row: Twist tog two different colored chenille stems. Loop one end for the hanger. Glue three snowman faces down the length of the twisted stems.

I hope you have a wonderful Holiday!

http://www.freepatternsdonnascrochetdesigns.com/
Posted by Donna's Crochet Designs at 10:51 AM

these are so cute..i cant wait to start making them

I am so glad you like them!
For a very simple pattern, they can be made so many different ways. I'd love to see if you come up with anything new!

These are way too cute. Just happened across them today. Perfect for a kids craft class next winter. Got lots of little circles to crochet. :) Thanks!!!

My MIL likes snowmen and I've been searching for an ornament to make for her and didn't find one I liked....UNTIL NOW! - VERY CUTE! - great job! - thank you! :)
-Kat1e

Love them Donna! Thanks so much for sharing! They are adorable!
I didn't see the pattern on how to make the layered ruffle (second sample in the pic), do you have it posted somewhere?
Thanks again!

Sorry about that. Here it is: